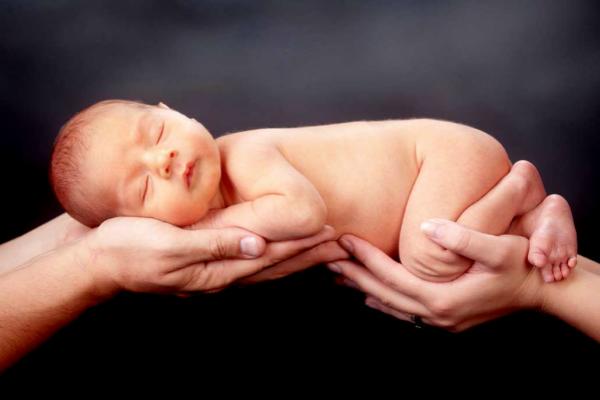 I recently had the privilege of treating a 12 days old baby. Both parents were present at the session, their love was filling the room while they entrusted me with their most precious part creation. Here I will call him Parker.

The delivery had been thoroughly prepared between the parents, the obstetrician and the maternity ward. However, after 35 hours of labor and a c-section, the baby had difficulties nursing and remained curled, embodying the position he took during labor. The pediatrician diagnosed that Parker was too tensed and advised the parents to stretch him.

Mary, the baby’s mother, had been a client of mine. After 10 years of suffering from regular migraine headaches, Manual Therapy offered her the relief she had been seeking. Mary contacted me to see if something less drastic than direct stretching could help her newborn. I proposed CranioSacral Therapy.

There are two things children should get from their parents:

Parker was asleep when they arrived at my office. His mother delicately placed him at the center of the session table, which suddenly seemed ridiculously oversized. I laid my hands under his lower back and the back of the head and started to listen to his tiny body. Then, with both hands gently cradling the head, still very soft at this young age, I simply invited him to take all the space he needed in this world. Time to time Parker would open his eyes and slightly move his lips in the shape that would eventually create a smile in a few weeks then slide right back to sleep.

Next, I checked his sucking around my gloved finger. I asked Parker to not get mad at me for not delivering his food when he was demonstrating with so much enthusiasm exactly what I was hoping to feel: a determined and strong sucking skill. Proper nursing was now assured. We could move on to the second subject of interest.

Just like a plant needs light and space to grow,

a child needs love and freedom to unfold.

Parker was curled up all the time, never allowing his body to fully rest and be supported by the table or my hands. With both my hands around his head, I could feel a line of tension riding along the right side of his body. I kept one hand on the head and moved the other hand on to his torso. I stayed there for a few minutes listening, present, applying the minimum pressure necessary to remain in physical contact with the torso. My intention was simply to mirror the existence of this line of tension so that the body could recognize it and release it. With his eyes still closed, Parker moved imperceptibly at first, a very slight movement of his hand and arm, then a little more until, undoubtedly under the amazed eyes of his mother, his dad and mine, the right curl of his body transformed into the fully relaxed torso of Parker laying flat on his back with his arms fully extended on each side.

The lower spine was still curved, however. The session had already been very long for such a young being and rich in developments. I asked the Inner Wisdom of Parker if we should continue or let it be for today. I was using the baby’s CranioSacral Rhythm to communicate and receive a precise answer. Not so surprisingly, Parker’s CranioSacral’s Rhythm indicated that this was enough for the day.

It was the first time Parker’s father had encountered  Manual Therapy. At the end of the session, I pointed to the anatomy atlas and I asked if he would like me to provide more technical details about what he just saw. The father answered that it was the first time his son was laying so flat since he was born and that was proof enough for him.

All mothers will be able to relate to this: bringing a life into the world is one of the most intense and powerful events  of all. In most traditional cultures, soon after birth the baby would be ritualistically massaged by an older woman in order to be “unfolded” and restored. In our hi-tech hospitals it’s extremely rare that such care is offered for the well-being of the baby. The baby is merely weighed and measured, washed and packed.

Based on anatomy, physiology and other modern sciences of the body, Manual Therapy helps the comfort of the mother and the baby’s position before and during the birth process to avoid excessively long labor. After birth, Manual Therapy helps newborns and infants to overcome many common health challenges such as flattening of the head from the use of forceps or vacuum extraction, feeding issues, colic, abnormal muscle tone, respiratory distress or sleep disturbances, to name a few. Ridding the child’s central nervous system of tensions with CranioSacral Therapy will in time help prevent behavior issues and learning disabilities.

A new baby is like the beginning of all things

– wonder, hope, a dream of possibilities.

I am looking forward to the day when an expectant mother won’t have to choose between natural birth and harvesting the wisdom of the body or the security of the modern hospital. All types of technologies – the practical application of knowledge – will one day, side by side, nurture each step of mother and baby during this beautiful adventure.

While we try to teach our children all about life,

our children teach us what life is all about.

A Path To Accepting And Peaceful Living Together